The boys had a busy first week. On their first full day in Seattle we did all the main touristy things: the Space Needle, the MoPop (aka the EMP), the monorail, the amazon spheres, Top Pot Donuts, Pike Place Market, Columbia Tower, the Bainbridge Ferry, and Ivar’s.

I definitely recommend doing all these things on a weekday to avoid the crowds. Pike Place is never not busy but it is significantly less terrible if you go off peak hours. The same is true of the Space Needle as well, not only will there be less of a line early in the morning or late at night, but tickets are also cheaper during those times as well. We lucked out since I used to work at the Needle and still had an in with my old coworkers, so we got to go up for free and without waiting in line. The Needle has been undergoing a major renovation the past few months and still wasn’t fully finished when we visited. The outside observation area is almost entirely made of glass now, making for an almost uninterrupted view of the city. Sean and James had fun freaking themselves out by leaning their backs up against the glass, which is set out at an angle from the edge of the building. However, I think they were unimpressed by the rest of the observation deck which was clearly unfinished. Because we were VIPs, we got a quick sneak peak of the restaurant’s renovations on the way down. When it’s finished it will be the world’s first rotating restaurant with a glass floor (definitely not for the acrophobic visitor).

After a couple pics outside Seattle’s most iconic building, we walked across the street to check out the KOMO 4 News building, which was used for the outside shots of the hospital in Grey’s Anatomy, one of James’ favorite shows. There was a sports bar in the building which we returned to later to watch one of the World Cup games. But before that we spent a couple hours in another iconic piece of Seattle’s architecture, the MoPop, or what was formerly known as the EMP. Sean enjoyed the Nirvana and Jimi Hendrix exhibits, which included the guitar Jimi played the Star Spangled Banner on, while James geeked out in the Sci-Fi room. They both enjoyed the Indie Games exhibit, where they quickly became addicted to a dark eerie video game called The Most Dangerous Game.

Next we took the monorail from Seattle Center to Westlake, which was a bit unnecessary as it’s only a couple blocks away. The monorail is a cool piece of Seattle’s history since it was built in 1962 for the World’s Fair, just like the Space Needle. They both have a retro-futuristic look to them, and the monorail made sense in the 60’s when the brand new Seattle Center was out on the fringes of the city, but these days it’s probably not worth the $2.50 ride when you could just as easily walk. We still got a cool time-lapse video from it though.

After getting off the monorail we walked to the new Amazon Spheres which just opened at the beginning of this year. They are three bubble-shaped buildings made of glass at Amazon’s headquarters downtown. Although they are an interesting piece of architecture to look at, there wasn’t much more to them than that, and we weren’t able to get inside, so we moved on to our next stop, Top Pot Donuts. It was here that I learned that the boys had never seen a maple bar before and were hesitant to even call it a donut. They were also disappointed there weren’t more donuts with jam or custard fillings. That being said, they loved it. James in particular was a fan of his cookies and cream donut.

After gorging ourselves on the sweet stuff we walked down to Pike Place. We watched the famous fish throwers, took pictures with the brass pigs, got grossed out by the gum wall, and avoided the long line for the “first” Starbucks.

We got our Starbucks fix later however, at Seattle’s tallest building, the 76-story skyscraper called Columbia Center. It was free to go up to the Starbucks on the 40th floor, but there was a small fee for the observation deck on the 73rd floor. I think the boys may have enjoyed it a bit more than the Needle because it was more polished and had better views of downtown. We rested our feet for a bit up there before walking down to the waterfront to take the Bainbridge ferry.

Seattle is home to the second largest ferry system in the world, beat only by Japan, and going for a ferry ride is definitely a must in Seattle. The view it provides of downtown from the water is hard to beat. Unfortunately most of the shops in Bainbridge were closed by the time we got there, but it was still enjoyable to walk around the park and see all the multi-million dollar houses.

We rounded out our evening by eating dinner at one of Seattle’s most famous restaurants, Ivar’s Acres of Clams out on pier 54, just a little ways down from the ferry terminal. James got their classic fish and chips, Sean got shrimp and chips, and I tried out the salmon chowder. All of it was delicious. 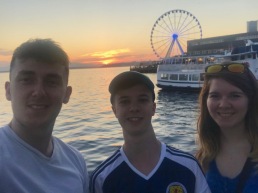 We started out the next day by getting a few quick photo ops at Kerry Park, which has the best views of the city. Then we stopped by the Fremont troll, a giant troll statue who lives under the Aurora bridge, for a few more pics before heading over to Gas Works Park. Gas Works is probably Seattle’s most iconic park. It is made distinct by the industrial ruins of an old gas refinery which overlooks Lake Union. The lake doubles as an international airport and we saw a few sea-planes take off from and land on Lake Union while we were there.

The boys tried to teach me how to play soccer and I tried to teach them how to play volleyball. I think we were both semi-successful. We went for lunch at a barbecue place called RoRo’s, which I definitely recommend, it was delicious and cheap. Then we walked over to the Fremont Brewing Company for a couple of pints out in their beer garden. Great atmosphere and great beer.  After that we rented some kayaks out on Green Lake (Glenn would be proud) and went for a quick swim to cool down an wash off our sweat.

That night Sean and James were subs for my Dad’s indoor soccer team. Sean hadn’t played in a couple of months and James hadn’t played in a couple of years, but they still performed pretty well and Sean even scored a goal. On the way home we stopped at Dairy Queen and the boys had their first Blizzards (that’s soft serve blended with candy, for those who don’t know). The boys were a bit surprised when they were handed to them upside-down. It was a fun but exhausting day and they definitely deserved that ice cream.

Want more? Read about our next set of adventures in Vancouver and Snow Lake!

This site uses Akismet to reduce spam. Learn how your comment data is processed.