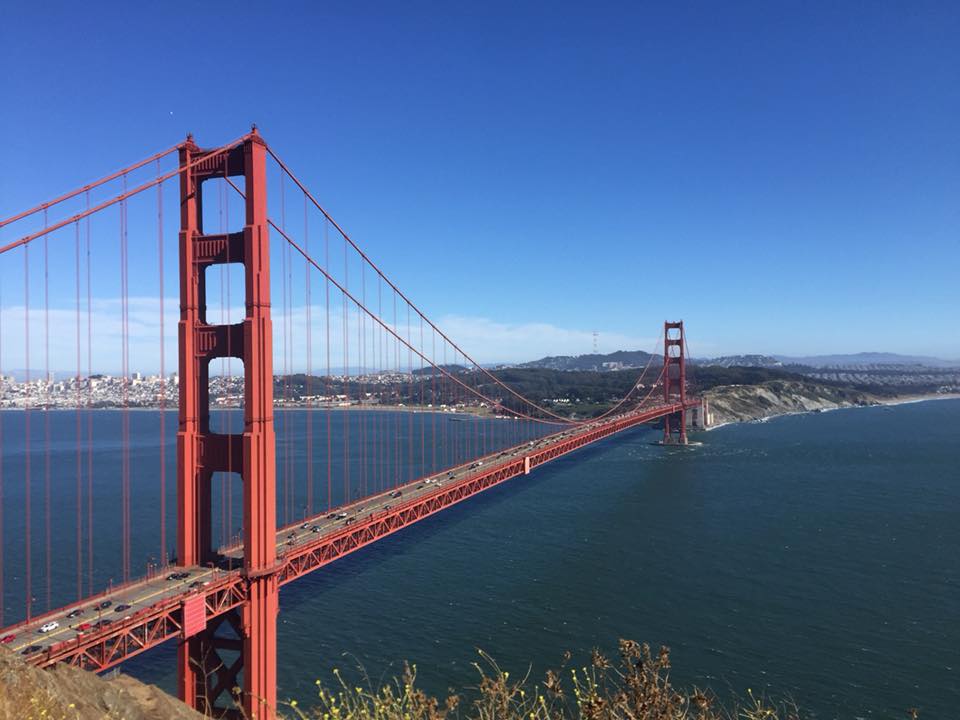 My grandma and her sisters used to live outside San Francisco when they were children. Occasionally their aunties Edna and Irene would dress them up like little ladies and take them into the city for a treat. That treat was usually Blum’s coffee crunch cake. Years later, Blum’s went out of business. Luckily, my great aunt Victory managed to get the recipe and published it in her cookbook, Family Cooking Celebration. 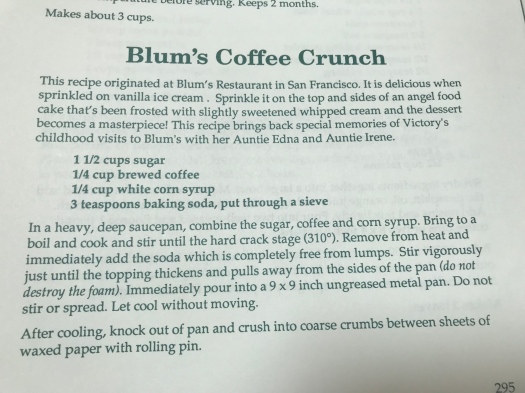 She wasn’t the only one to get the recipe though, and now Yasukochi’s Sweet Stop carries on the tradition in San Francisco. As soon as I arrived in SF I was bombarded with messages from my grandma and other family members insisting that I get a slice of Blum’s coffee crunch cake at Yasukochi’s. As it turns out, my family are not the only ones obsessed with this sweet treat. When Sean and I went on a Saturday afternoon they had already sold out, and they would not be open again until Tuesday. We struck out that day, but I did come back on my own the following Tuesday morning and managed to bring back a slice for both Sean and myself. It was incredibly sweet and just as delicious as my grandma and aunts had led me to expect. I highly recommend it to anyone who is in the San Francisco area — just make sure you go in the morning. 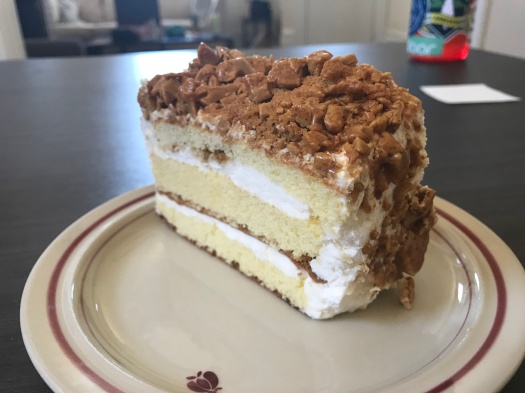 Although Sean and I weren’t able to get the cake on the first day we went we decided not to waste the trip and check out the area. Yasukochi’s is in Japantown, which we wouldn’t have thought to visit otherwise. Japantown is like the less touristy and underrated neighbor to San Francisco’s more well known Chinatown. There is a large mall there with lots of shops and restaurants that we had fun checking out. Sean and I went into a bansai tree shop, grabbed a bento box for lunch, and tried out the dessert dragon’s breath: a sweet treat made of cereal balls frozen with liquid nitrogen so that when you eat them and breathe out it looks like you are breathing out steam, like a dragon.

That night we went to Buffalo Wild Wings to watch the UFC fights since James is a fan and that’s one of the only places you can watch them without a cover fee. Personally, I’m not a fan of BWW. The food is only mediocre and that particular one did not have good service. Still, we got to sit there for several hours watching the fight on multiple screens with no pressure to leave and they have pretty good fried pickles, so it worked for our purposes. We went to a couple other BWW’s later in the trip for other UFC fights, but my opinion of them hasn’t improved much.

The next day we took one of Chandini’s recommendations and decided to go to Baker Beach. This beach is right next to the Golden Gate Bridge and a pretty popular spot. We threw the football back and forth for a while (I got some pretty good action shots of the boys) and James took a run up to the rocks near the bridge and back. He told us when he got back that he had seen a man who was fully naked on the beach. Little did we know, that end of the beach was the nudist section. Chandini hadn’t warned us. 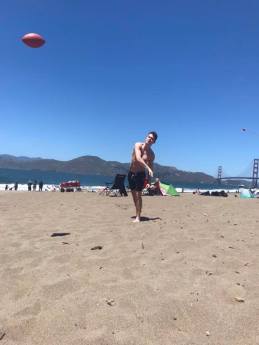 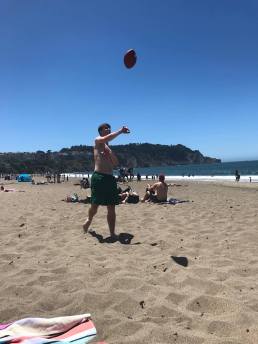 We helped James dig another hole in the sand, and buried Sean in it this time. Then because we are cruel people we laughed and videotaped it as he struggled to get out. Once he finally dug himself out we took a walk down to the nudist end of the beach together and got some pictures on the rocks together with the Golden Gate Bridge in the background (the wind didn’t really cooperate with us though). 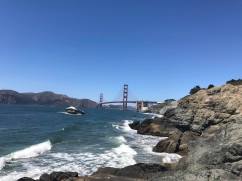 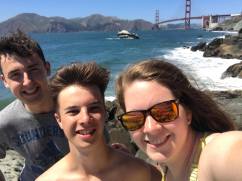 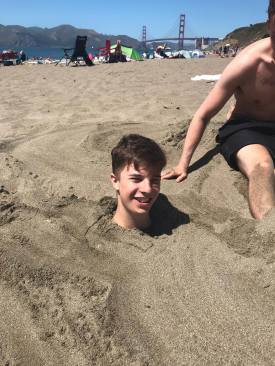 After the beach we were starving and decided to go back to Ghiradelli Square. We ate in their brewery and tried to play some shuffleboard, although none of us knew the rules. Then we went to the ice cream parlor section and tried out their sundaes, finally getting a taste of the chocolate they’re known for. 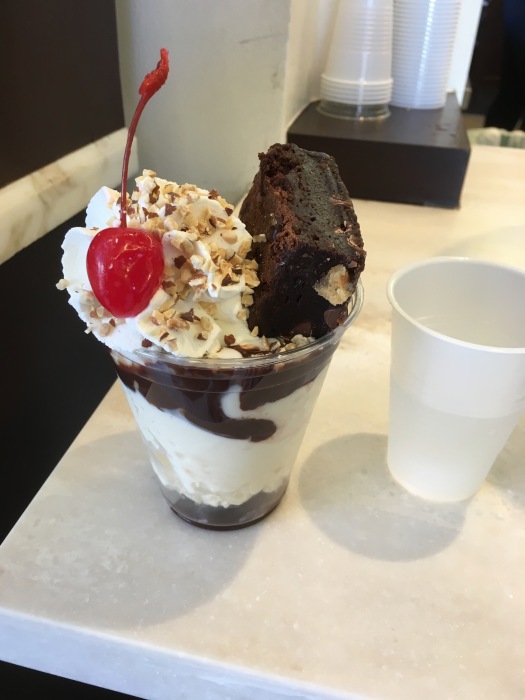 That night when we got back we realized how sunburnt we were. We had put on sunscreen that morning but never re-applied, which was a mistake. James had only a mild burn which healed quickly. Sean and I, on the other hand, had seriously burnt our backs and were bright red. We were a lot more careful about applying sunscreen every day after that. 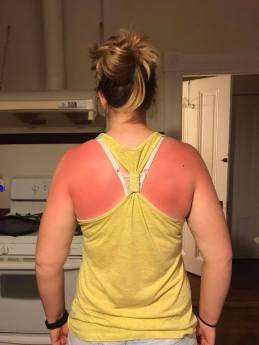 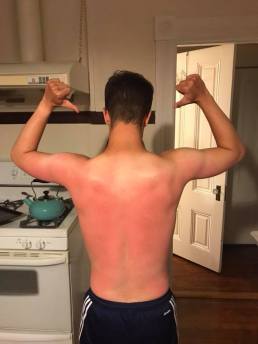 The next day was one of the boys’ favorite days of the whole trip. We got up early to get in line at Pier 33 for last minute tickets to Alcatraz, which normally sells out months in advance. We lucked out and were one of the last groups of people to get tickets. Our tour wasn’t going to start for another couple hours so we walked down the waterfront towards the wharf and explored Pier 39 again before any of the shops had opened and it was still empty. 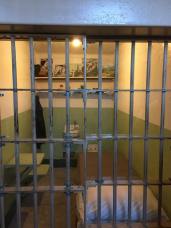 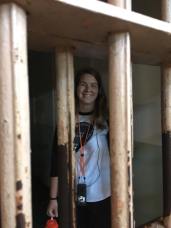 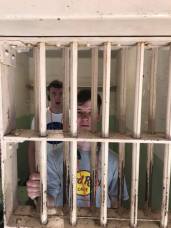 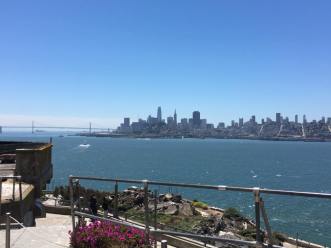 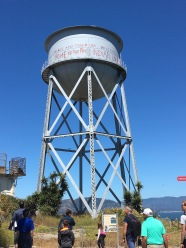 The ferry ride over to Alcatraz was nice and short, and when we got there we watched a little video about its history, first as a naval base, then as a prison, then as a Native American occupied land during the Civil Rights movement in the 60’s, and now as a National Park. We walked up to the actual prison building and took a free audio tour which described what it was like for prisoners living there and several escape attempts. You could step into the D Block cells, which were pitch black and isolated. There were markings on the floor in one of the corridors from where grenades had been dropped from holes in the roof in an attempt to stop a prison riot.

After we finished the tour, we stayed and listened to one of the Park Rangers who was giving a talk on all the different escape attempts at Alcatraz. It was super interesting, but by the time we had finished and got back on the boat we were starving. We booked it down the wharf to get lunch at In-N-Out. After eating probably too much, we went to Basically Free Bike Rentals and got some bikes to ride across the Golden Gate Bridge. They have a deal where the amount of money you spend on your bike rental is given to you as a credit at the store Sports Basement, hence the name basically free. 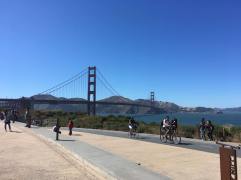 Riding across the bridge wasn’t too much of a workout, (although eating all that In-N-Out beforehand probably wasn’t smart) and it was a fun way to enjoy San Fran’s most iconic structure. There were a couple of vista parks on the other side with great views of the bridge. Sean had an old photo of his grandfather, who was in the navy and had visited that exact spot 59 years ago in 1959. The photo shows Sean’s grandfather with two friends laughing in front of the bridge. We managed to do a pretty good job of recreating it, minus the sailor uniforms. 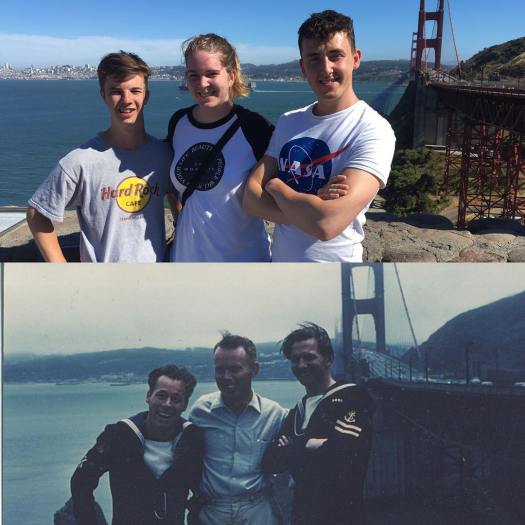 Sports Basement was on the way back to return the bikes, so we stopped there and spent our credit on MREs to eat while camping at Yosemite (MRE is just the fancy military term for those backpackers meals we had before which just require hot water).

The next morning was Tuesday, so the boys watched some World Cup games while I went back to Japantown and got the Blum’s coffee crunch cake. We knew it was our last day in San Francisco so we set out to do one of the last San Fran clichés we hadn’t done yet: riding the cable cars. It was fun to stand and hang off the car, but you have to be careful not to lean too far back and hit any cars or one of the other cable cars. 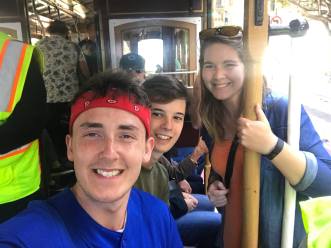 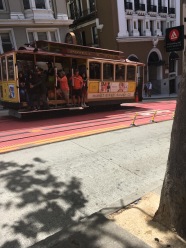 Chandini and Erin picked us up after our cable car expedition and we went to taco Tuesday at a place called Tacolicious. We ordered a pitcher of margarita, which the boys had never had before. It was the generic lime flavor and not blended and they didn’t like it very much. I promised them that other margaritas are really good, especially if you get a flavored one blended with ice. They also tried out queso for the first time that night and real guacamole, not the weird stuff with cream in it they sell at Tesco in the UK. Scotland needs to step up their game in the Mexican food department.

San Francisco is one of the most LGBTQ+ friendly cities in the world and we celebrated the culture that night by grabbing dessert at Hot Cookie, which sells dick shaped cookies. They were a good laugh and actually pretty tasty. 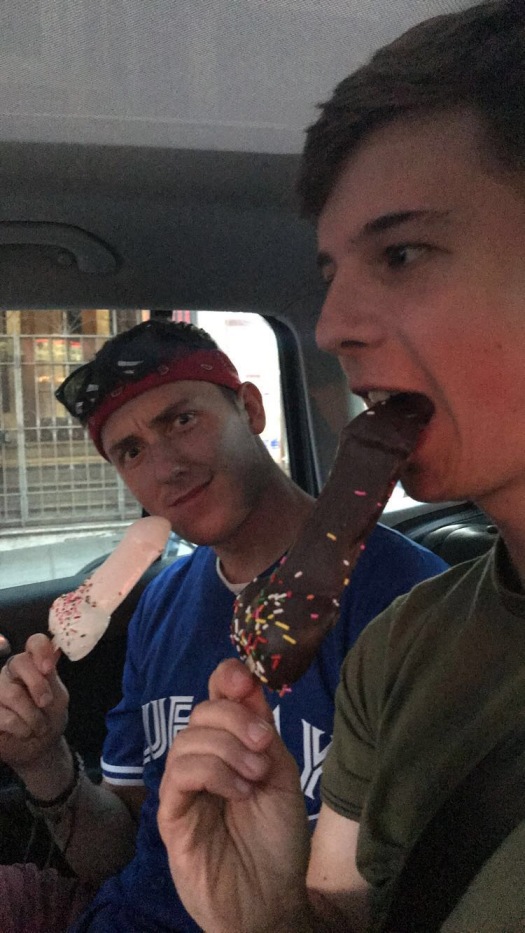 Then Chandini and Erin took us up to Twin Peaks, which is a park with great views of the city. It was windy and freezing though so we didn’t stay for long, but it was a good way to round off our last night in San Francisco.

Want more? Read about our next set of adventures in Yosemite!

This site uses Akismet to reduce spam. Learn how your comment data is processed.